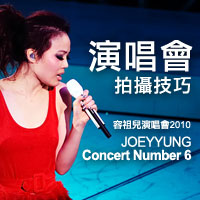 Shooting a concert will be more difficult for beginners, because there are not many controlled places during the concert, and you don’t have room to walk around casually, the photographer must be very familiar with various camera settings and skills to cope with. In the article, the author will share how to prepare for the concert, the difficulties, and solutions encountered during the shooting.

Preparation Before the Concert

General singers’ concerts are divided into levels, of course, the fare of the front row and recent singers is the most expensive. For concert shooting, the position is more important than everything, because most people can’t walk around during the concert, it ’s easier to sit closer to the singer to compose the picture.

Camera: For general concert photos, the camera is not very demanding. There is no need to use an advanced camera. Entry models such as Nikon’s D90 and Canon’s 550D can also handle it.

Lens: Unlike the camera body, the lens plays a very important role in concert shooting. A large aperture and long focal length lens is often the key to shooting. I will use a wide-angle lens when shooting a concert. And a telephoto lens, the details will be introduced later.

Tripod: If space permits, you can bring a monopod instead of a tripod, because a tripod uses more space and is not as convenient as the monopod. But, handheld shooting is also possible, the tripod is not necessarily needed to be carried.

Flash: If the seat position is not close to the stage (such as the actual combat situation introduced by the author later), you can not bring a flash. Not using a flash can not only preserve the atmosphere of the scene but also avoid the flash affecting the singer.

Camera Handle (Straight Down): It is a good idea to bring a camera handle because this accessory can make it easier for you to take vertical photos (especially for long time shooting), some handles can also put two batteries to shoot longer periods.

Filter: No filter is used.

Memory card: Two hours of shooting a lot of space, be prepared.

Although the ticket I bought is the most expensive (HK $ 480), the location is still not good, it is a distance from the stage, and it is not the front stage, which makes the shooting difficult, but this way it can be more shared with ordinary shooting Tips because not everyone can buy a ticket in a good location!

First look at the distance the author was sitting from the stage: 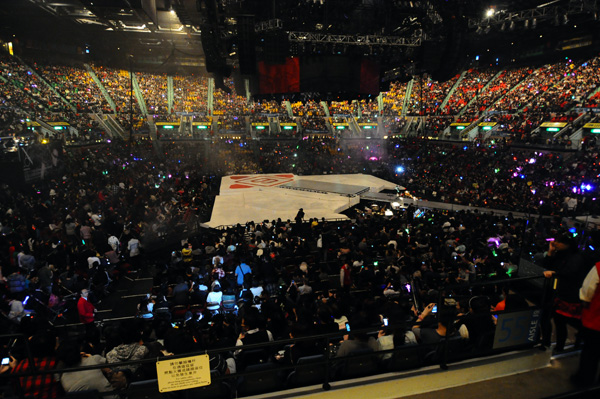 The author’s position is quite far from the stage, and not a front stage

Look at the equipment I carry: 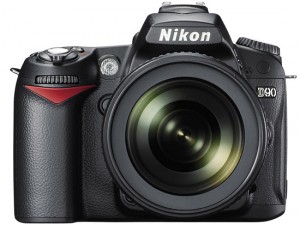 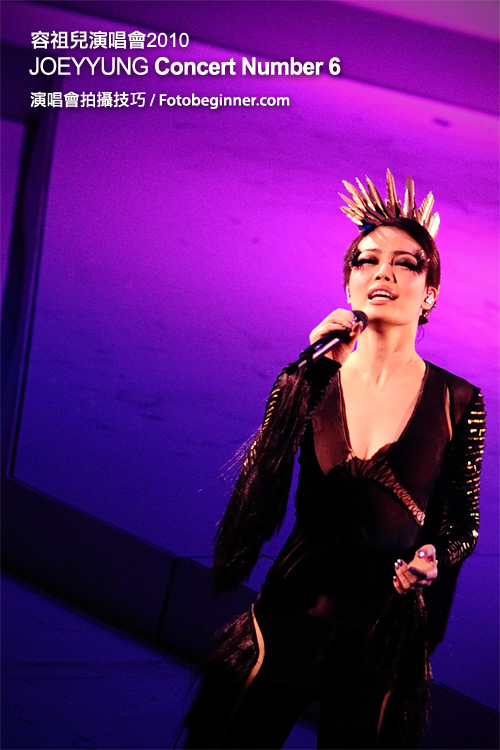 After looking at the distance and equipment from the stage, let’s look at the camera settings. This part can be very important because there is not much time to set after the concert starts!

Shooting Mode: Shutter Priority (S/Tv-mode)
Many people will choose manual (M) or Aperture Priority (A/Av), but I recommend using Shutter Priority (S/Tv) because you will use a long focal length of 200mm. According to the requirements of the safety shutter, the shutter must be faster than 1/200 second to ensure that the photo is not blurred by camera shake. Also, when the singer is dancing, the shutter is more demanding, so the shutter is far away. This is important when shooting from a distance. 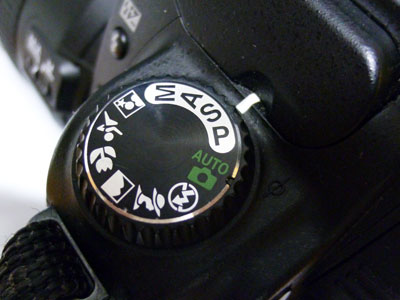 Aperture: There is no need to Adjust
The Camera has two main functions to determine the aperture: (1) control how much light enters; (2) control the depth of field. The depth of field will not be too shallow when shooting at a long distance (because it is far from the singer), but the large aperture can absorb more light in a short time is the key, especially when the lighting in the venue is insufficient (when the spotlight is shining on the singer), so the larger the aperture available for the lens, the better! But because our shooting mode selected “Shutter Priority”, this part will be left to the camera to decide. We can take care of the shutter and ISO.

ISO: Turn on automatic ISO and set its automatic value to a level lower than the available maximum ISO value (if available ISO3200 is set to automatic ISO-maximum ISO1600)
In the part of ISO, I want to introduce a very useful function- automatic ISO. This function can automatically increase the ISO to make the photo meet the exposure requirements, and you can set the highest value of the Auto ISO to avoid using an excessively high ISO. For example, I set the auto ISO to a maximum of 1600 and a minimum shutter speed of 1/200 in the menu. Seconds, the camera found that the maximum aperture under the shutter of 1/200 seconds did not automatically expose the photo at ISO200, so the camera will automatically jump ISO to ISO800 or higher. I turned on Auto ISO in this shoot and set it to a maximum of ISO1600. The minimum shutter value can be set to a safety shutter (if a focal length of 200mm is used, it is set to 1/200th of a second). 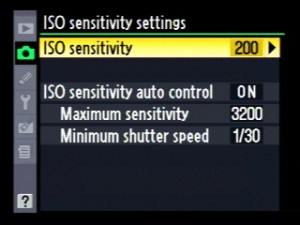 Shutter: In line with the safety shutter, if the focal length is 200mm, a shutter of 1/200 second will be used.
Because I use the “Shutter Priority” mode (S/Tv), we can set the shutter by ourselves. 200mm focal length (because it’s far from the stage!), So I set the shutter speed to 1/160 second or 1/200 second. Although many lenses have anti-shake systems, the singer has plenty of dancing parts. Holding the heavy equipment makes the camera shake more! So use 1/200 second speed!

White Balance (WB):
The lighting of the daylight white balance stage changes a lot, so I manually adjusted the white balance to “daylight” to make the colors of the photos closest to the original lighting effect.

Storage format: RAW + JPEG (FINE)
I used a 16GB memory card, so it is no problem to save the file as RAW + JPEG (Fine). JPEG is used for quick viewing on the computer, and RAW is used for later modification.

Focus point:
I used a single-point focus to make the focus more accurate.

Metering: Spot Metering
It is strongly recommended to use “Spot metering”, this is an important part of the setting. The usage method is described in the back end of the article.

The camera can be adjusted after adjusting the above settings. Wait for the concert to begin! 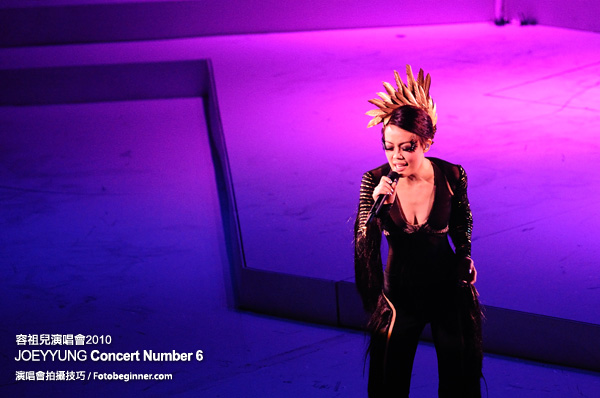 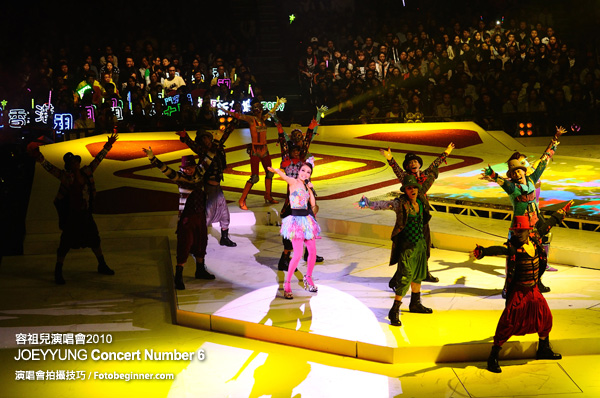 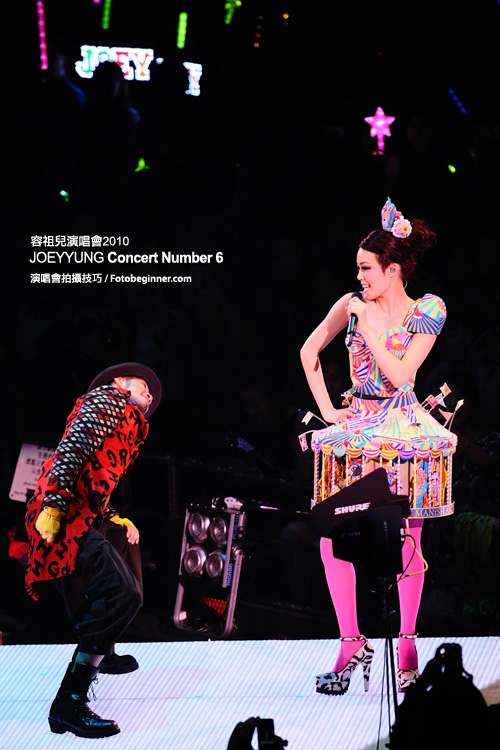 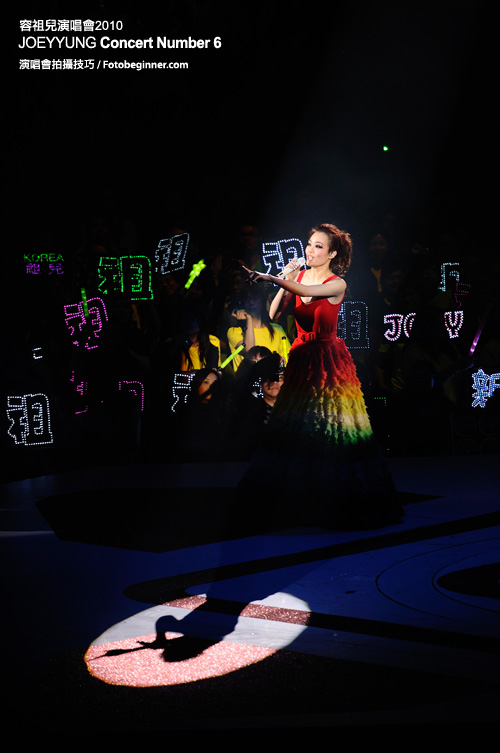 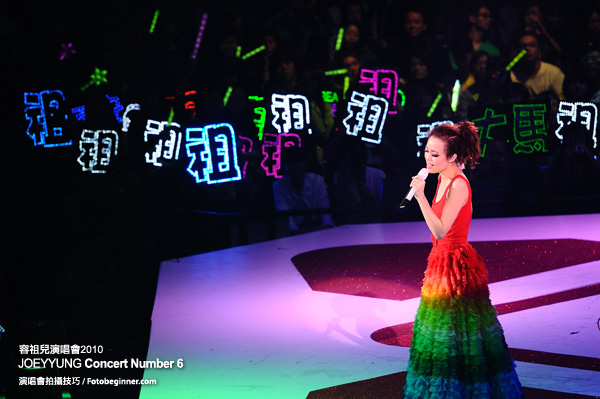 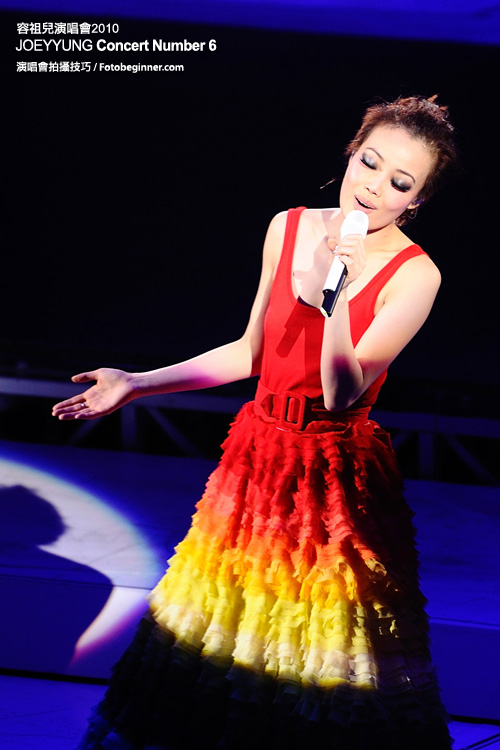 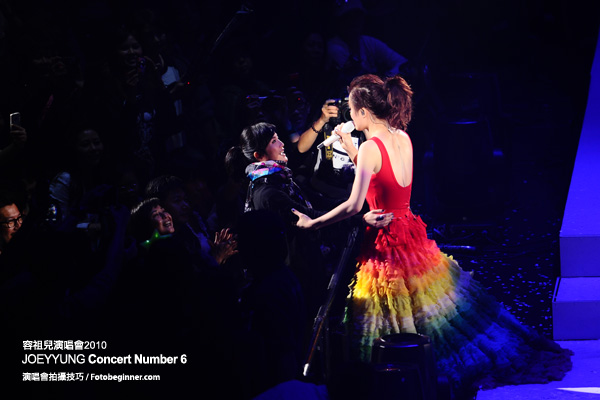 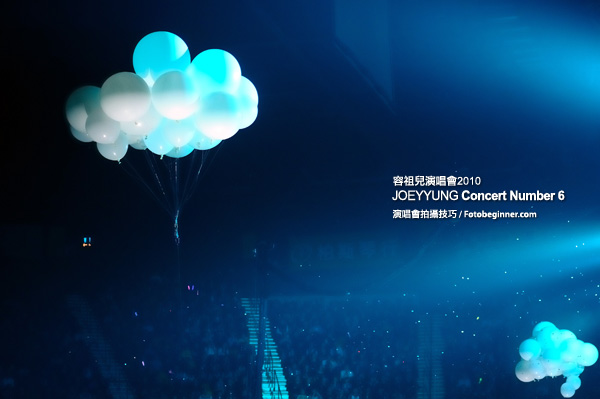 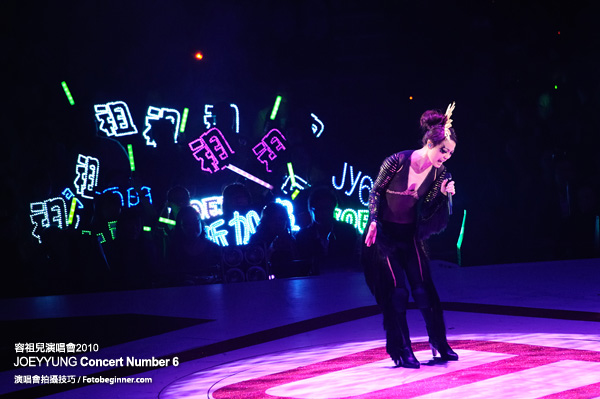 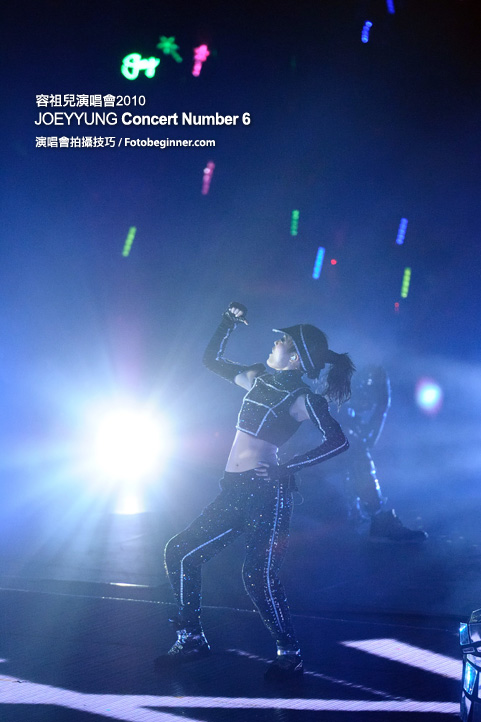 Before the concert, you can use the wide-angle lens to shoot the stage. When the concert starts, you can always use the telephoto lens! 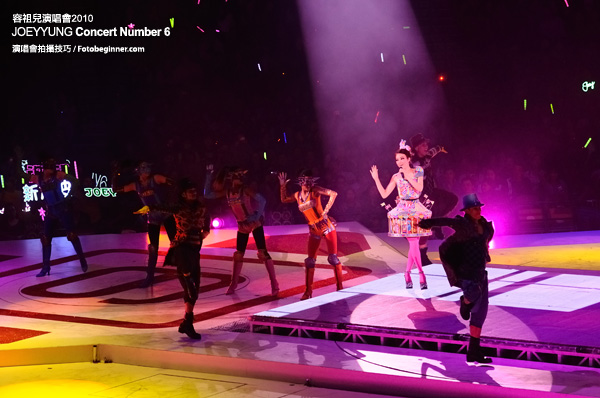 How to Use Spot Metering

To ensure that the singer’s face is metered correctly, we will use “Spot metering”, but in the spot metering mode, the camera will meter by the focus point (many cameras will only use the middle focus point to measure) The metering will change again when framing, so what should you do? The solution is to use AE-Lock! AE-Lock means the aperture and shutter value will be locked and not changed to facilitate composition.

Note for Canon users: The AE-L key on the Canon body is marked with an asterisk “*”

The following picture illustrates how to use spot metering with AE-Lock: 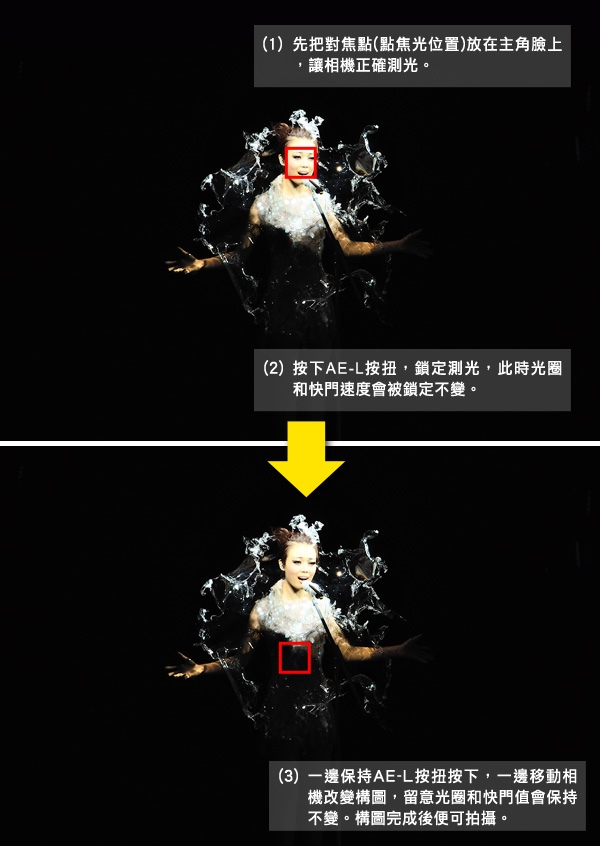 How to use spot metering with AE-L 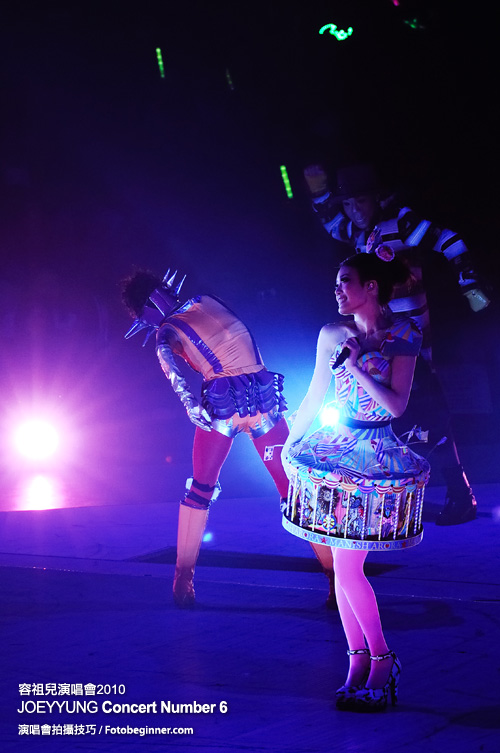 Sometimes spot metering doesn’t have to be on the singer’s face, this photo is taken next to the spotlight so that the spotlight will not be overexposed (S-mode F/6.3 1/200s ISO200) 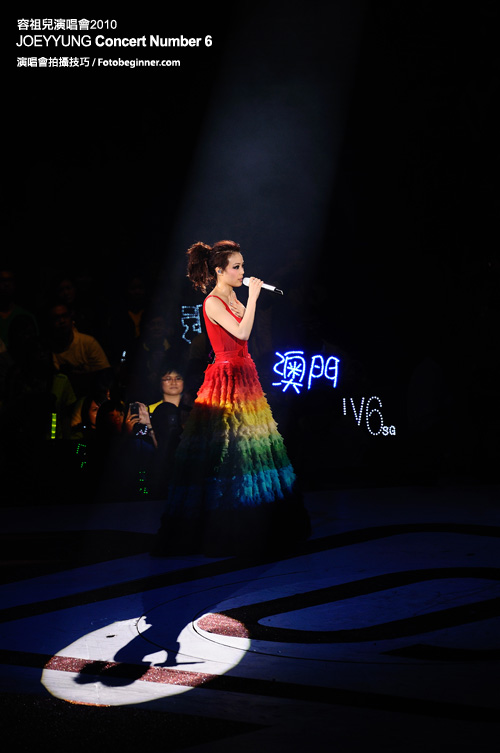 The Importance of a Large Aperture Telephoto Lens

As mentioned earlier, a large-aperture telephoto lens is important. What is the reason? To understand the reason, we must talk about the aperture, shutter, and ISO.

Remember that we shot in “Shutter Priority” (S/Tv) mode? In this mode, we control the shutter and ISO, and the aperture value is determined by the camera. But which shutter speed should be used? This is determined by the “safe shutter”! According to the “safe shutter” law, the shutter speed must be faster than 1/(focal distance). For example, the focal length is 200mm, and the safety shutter is 1/200 second. In actual shooting, we will set the shutter at 1/200 seconds (assuming that it is far from the stage, a 200mm focal length is used).

The next step is to set the ISO: because we use automatic ISO, the highest ISO will be ISO1600, but the higher the ISO value, the more obvious the noise, and the photo quality will decrease. Therefore, we hope to set the ISO value as low as possible. If the ISO value is low and the photo will be exposed correctly, the only thing you can do is to increase the aperture! For this reason, the larger the aperture you can use with your lens, the better (such as F / 2.8) so that we can maintain the shutter speed while using a low ISO value to maintain the quality of the photos! 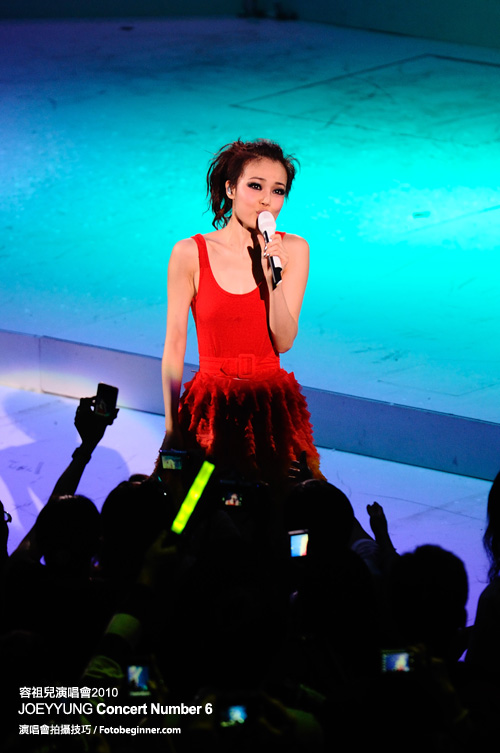 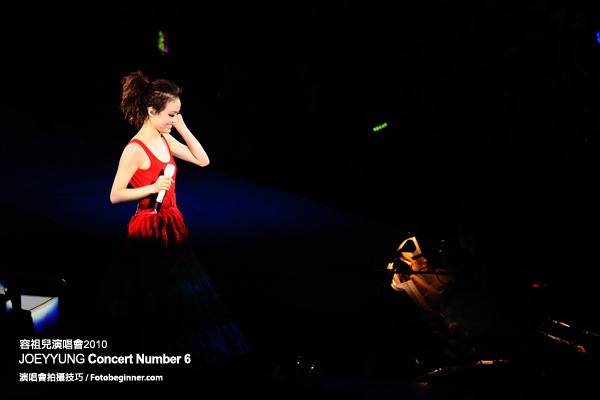 Turn to the next page to see more tips →