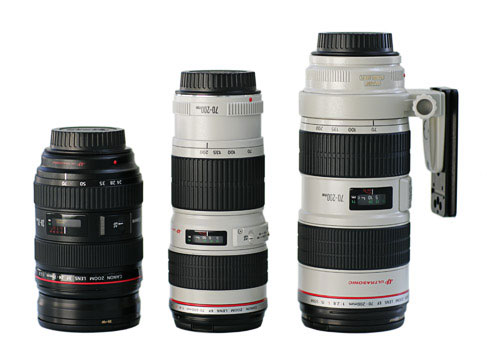 Canon produces a lot of lenses, and what do the English numbers above represent? Let me introduce them here:

The mount name of Canon EOS cameras is also the series name of EOS original lens.

The electromagnetically driven aperture control elements of all EF lenses are integrated components of the anamorphic stepping motor and the aperture blades. They are controlled by digital signals with high sensitivity and accuracy.

Cyanite is a calcium fluoride crystal with extremely low dispersion, and its ability to control chromatic aberration is better than UD lens. Strictly speaking, fluorite is not glass but a crystal. It has a low refractive index (1.4) and is not affected by humidity. Cyanite lenses are generally not exposed, so you won’t touch them directly. The fluorite lens is not as impact resistant as ordinary glass, but it is not as fragile as imagined, so no special care is needed in use.

Full-time manual focus function, that is, whenever the lens is in auto focus, you can manually adjust the focus without damaging the lens.

Canon professional lens logo. Compared with consumer lenses, the L-head has ground aspherical lenses, UD (low dispersion), SUD (ultra-low dispersion) or Fluorite (fluorite) lenses, which are important foundations for the excellent optical quality of the lens. Generally, the quality of the lens structure is also much better. Its mark is the red marking line on the front of the lens, which is Canon’s high-end professional lens.

Image stabilizer is to reduce the effect of hand shake on imaging by correcting the movement of optical components, so it is also called anti-shake lens. In the IS lens, a gyro sensor is installed, which can detect the vibration of the hand and convert it into an electrical signal. This signal is processed by the built-in computer of the lens and controls a set of correction optical components to move parallel to the film plane to cancel out. Imaging light shift caused by hand shaking. This system can effectively improve the effect of handheld shooting. In general, the IS lens allows you to use a shutter speed that is two steps lower than theoretically. In other words, when you use a common 300mm lens, you can only choose a speed of 1/250 seconds or more, and with a 300mm IS lens, you can take a clear picture in 1 / 60th of a second.

This is a traditional motor with a drive shaft, which consumes electricity and does not support full-time manual (FTM). It is mostly used for cheap low-end lenses.

The photos taken with this lens are very different from the effects of camera movement or inaccurate focusing. It uses intentionally designed spherical aberration to make the subject clear and soft and beautiful. The effect of soft focus is different according to the aperture size and special adjustment device.

An S-UD is roughly equivalent to a fluorite lens.

A special type of optical glass is widely used in lens chromatic aberration control because it can control the dispersion of light in the spectrum. Using two UDs together is roughly similar to using one fluorite lens.

The AF focusing motor type used in most EF lenses, a motor that rotates using a vibration source with a frequency in the ultrasonic region, is the main component for achieving quiet, high-speed AF. There are two types of ultrasonic motors for EF lenses, Ring-USM and Micro-USM. The lens using an ultrasonic motor has a yellow ring on the front end, marked “ULTRASONIC”. The ring-shaped ultrasonic motor is a focusing motor used by Canon’s medium-to-advanced USM lenses. Its driving element is ring-shaped, and it does not require the use of any gears such as gears. Due to the high torque, the speed of starting and braking is much faster than that of a normal focus motor.