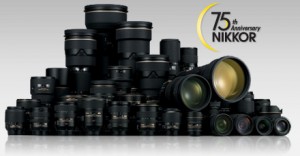 Like Canon, Nikon is also one of the largest manufacturers of camera lenses. It produces a lot of high-quality lenses, and the explanations of the English numbers above, etc., I will also introduce here:

AI: Automatic Indexing technology was
released in 1977, the first major change in the Nikon F mount. AI refers to the process and method of transmitting the maximum aperture value of the lens to the metering system for normal exposure measurement. When an AI lens is mounted on an AI-compatible body, the maximum aperture value of the lens is transmitted to the body’s metering system under the automatic engagement and drive of a mechanical linkage lever to achieve full-open aperture metering. Nikon F2A, F2AS, Nikkormat EL2, FT3 and FM are the first airframes to benefit from this technology.

AI-S: Automatic Indexing Shutter.
In 1981, Nikon modified the full range of AI lens mounts so that it was fully compatible with the upcoming FA high-speed program exposure method. These modified new lenses are AI-S mount Nikkor lens. It is very easy to identify according to the orange minimum aperture digits on the lens aperture ring and the aperture direct reading ring, and the polished grooves on the insert bayonet. When the AI-S lens is used in the Nikon FA body, it can provide information to the body to choose the normal program or high-speed program according to its focal length. When shutter speed prioritizes automatic exposure methods, they provide consistent exposure control over a very wide range of light. (Because the AI-S lens is customized for exposure “automation” on the FA, the auto exposure linkage of the body can control the aperture of the AI-S lens very smoothly for faster and more accurate exposure control ).

AF-S: Silent Wave Motor means
that the lens is equipped with a Silent Wave Motor (S). This motor is equivalent to Canon’s ultrasonic motor and can be used for “traveling waves” Provides energy for optical focusing, fast focusing with high accuracy and quietness, manual focusing at all times.

CRC: Close Range Correction The close-range correction
uses a floating lens design to ensure that the optical quality does not decrease during close-up. For example, AIS 24 / 2.8, AF 85 / 1.4D IF, etc. all use CRC technology.

DC: Defocus-image Control
Nikon’s original lens provides a unique defocus image control function. The front of the lens has a defocus positioning ring. The aperture value on the ring is 4 stops from F2 to F5.6, which are marked on the left and right sides of the ring. Instructions. This is a special type of fixed focus lens. Its biggest feature is that it allows blur control of the background or foreground of a specific subject in order to obtain the best out-of-focus imaging. This is very valuable when shooting portraits. It can help us control various parts of the photo according to what we want, which is also unmatched by similar lenses from other manufacturers.

The difference between G-type lens and D-type lens is that this type of lens has no aperture ring design. The aperture adjustment must be done by the body, and it also supports 3D matrix metering. This design reduces lens weight and reduces production costs. The G-type Nikkor lens is easier to operate, and there is no misoperation in theory, because it does not need to manually set the minimum aperture. This is a continuation of the plastic AF lens, aimed at photographers who almost never set the lens manually.

IF: Internal Focusing technology. The so-called internal focus means that when the lens is in focus, the front and rear group lenses are not moved, and the focus is achieved by a focus lens group floating inside the lens. The lens length remains unchanged during focusing. change. The use of IF technology makes fast and quiet focusing possible.

IX lens
In 1996, Nikon released a cheap, compact lens for APS camera Pronea. The characteristics are the same as the plastic AF-D lens. Can’t fit non-APS body. The reduced space reserved for mirrors means that this type of lens is different for 35mm cameras and the image field is too small to cover 35mm film. But standard AF lenses can be used with APS cameras.

Micro: Macro lens
means that this lens is a macro lens or has the function of macro shooting.

P-type lens: Built-in CPU lens.
The built-in focus motor is a “constant change” strategy, but this strategy is not very flexible for huge telephoto automatic lenses, which makes Nikon’s new body unable to use telescope lenses efficiently. In 1998, Nikon released a built-in CPU manual focusing telephoto lens (P) to meet the advanced auto exposure function of the AF body, thereby partially solving this problem. Although P-type lenses look the same as AI-S lenses, these lenses have the electronics and most of the performance of an AF lens.

PC-Shift: shift the lens to move the optical axis of the lens to adjust the perspective lens. Mostly used for architectural photography.

RF: Rear Focusing the difference between rear focus technology and IF is that RF lenses focus by rear lens groups. The rear lens is smaller and easier to drive than the front lens, ensuring fast focusing speed and the same lens length. RF also contributes to improving imaging quality.

VR: Vibration Reduction
The code name of the NIKON anti-shake lens, which can be used for handheld photography to increase the stability of the picture when the shutter speed is low.